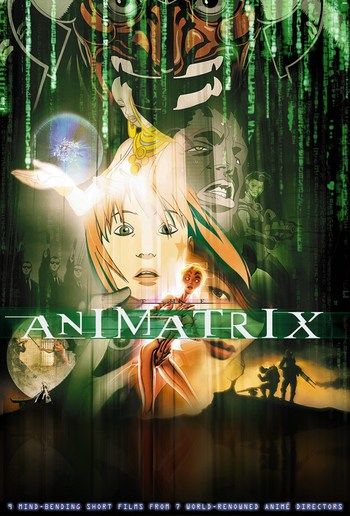 The Animatrix is a 2003 Direct to Video anthology of nine animated shorts set in the continuity of the Matrix film series and released as tie-ins around the time of the release of The Matrix Reloaded and The Matrix Revolutions.

Each short features an individual art style by renowned Japanese animators. All shorts cover a different theme related to the Matrix and are completely independent of one another beyond the universe.

Final Flight of the Osiris is an All-CGI Cartoon that acts as a bridge between the first film and Reloaded, and the others are Animes that expand backstories and the Matrix universe itself.

In order, the shorts are as follows:

open/close all folders
All segments
Final Flight of the Osiris
(Written by the Wachowskis, directed by Andy Jones, animation by Square Pictures)

This short (the only CGI short of the collection) directly precedes the events of The Matrix Reloaded. The crew of the human ship Osiris stumbles upon the machines as they begin burrowing to Zion. After the machines discover the Osiris, the crew tries to outrun the machines while hacking into the Matrix to deliver the news of their discovery to the Zion rebels. The story also ties in with the videogame Enter the Matrix, since the first mission has the player trying to retrieve the letter left by the Osiris crew.

The Second Renaissance
(Written by the Wachowskis, directed by Mahiro Maeda, animation by Studio 4°C)

A two-part story focusing on the Genesis of the Matrix. After the creation of AI, the machines eventually formed their own society and tried to co-exist with humans — but were shunned for reasons of economics and prejudice. War eventually broke out and well, if you've seen the movie, you know the outcome.

A short set between the first movie and Reloaded. Focusing on a young kid who, like Neo before him, senses something off about his world. Making contact with Neo, he soon finds himself forced to run for his life when his unnatural intuition attracts Agents. In case you're wondering, yes, this is the same character seen in the last two films. Aside from pestering Neo and crew during Reloaded, he later destroys the door mechanisms that allow The Hammer hovercraft inside Zion during the invasion in Revolutions.

Set in the training session of a woman named Cis, set in a Feudal Era Japan program, she enters a sparring match with partner Duo, only to find he is contemplating negotiating a return to the Matrix.

This short explores the story of track runner Dan Davis, who has become obsessed with setting a world record. The story switches between the days before his race and the race itself — where Dan runs so fast, he begins to break the rules of The Matrix...

Beyond
(Written and directed by Koji Morimoto, animation by Studio 4°C)

Within the Matrix, Japanese teenager Yoko searches for her lost cat, and during her search, she discovers a "haunted house" where physics don't seem to apply — but her discovery does not go unnoticed by the Matrix.

A Detective Story
(Written and directed by Shinichiro Watanabe, animation by Studio 4°C)

Cyberpunk meets Film Noir in a tale about modern-day Private Detective Ash, whose newest job — to find the elusive Trinity — gets more dangerous as he tries his best to get a lead on her. Carrie-Anne Moss delivers the voice of Trinity in her animated form.

Matriculated
(Written and directed by Peter Chung, animation by DNA)

This short follows a group of above-ground human rebels as they attempt to brainwash a captured machine so it will fight for humanity.