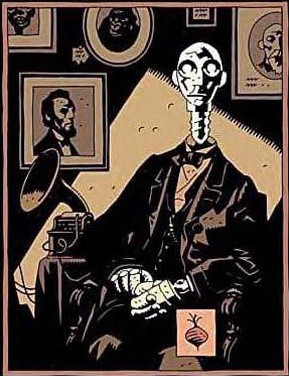 "There are two histories, one that is told and one that isn't. I, Abraham Lincoln, do order that America's strangest, most secret histories will only be recorded in one book. These are the adventures of the Amazing Screw-On Head."
Advertisement:

An Eisner-award winning one-shot comic book by Hellboy creator Mike Mignola about a Victorian robot who works as a secret agent for President Abraham Lincoln, who has the ability to place his head onto different robot bodies for whatever occasion suits him.

First published in 2002, it was later adapted into a 2006 pilot episode for the Sci-Fi Channel by Bryan Fuller, creator of Dead Like Me, Wonderfalls, and Pushing Daisies, with Paul Giamatti as the title character. The pilot was not picked for a series.

You can watch the pilot here