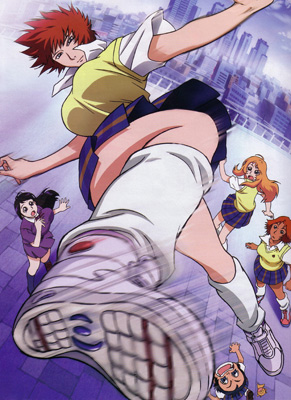 The last thing you saw before you blacked out.
Advertisement:

Air Master is a Seinen manga series by Yokusaru Shibata, which was serialized in Young Animal from 1996 to 2006. It was later made into a 27 episode anime produced by Toei Animation, which aired in 2003. The series is notable for its lead being a extremely tall, muscular redheaded schoolgirl, and actually animating most of its scuffles, to the point that stuff like story, plot or motivation comes second place to the fighting. The unusual art style borrows a lot from the 70s, which fans might like or dislike depending on their preferences.

The series follows Maki Aikawa, a six-foot tall schoolgirl. She formerly trained with her mother as a competitive gymnast, but due to her size, she could no longer partake in it. In order to gain the same thrill she once had while competing, Maki turns to street-fighting.