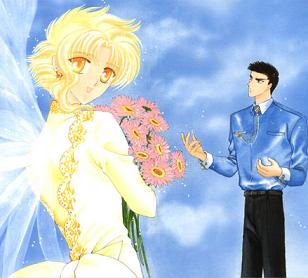 Dr. Shuichiro Kudo is walking home one night when he saves a small, winged child named Kohaku from a crow. In return for its rescue, the "child" reveals itself to be an angel, and offers to grant him one wish. However, what does a man who has everything wish for? Thus, Kohaku decides to stay with Shuichiro until he decides on a wish, as well as complete its original mission of find the missing Angel Master of Wind, Hisui.

A shoujo manga by CLAMP which ran in Mystery DX from 1995 to 1998, it was animated in a short music video as well as recorded as a drama cd.