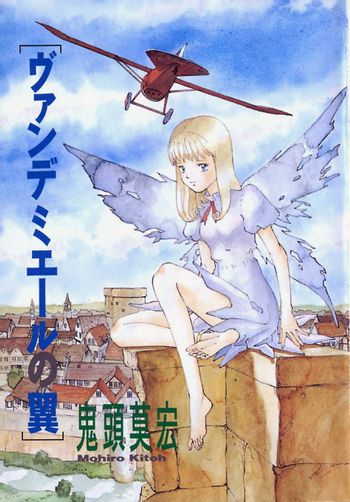 "God's creations need no wills of their own... they should listen to the voice of god."
— The Priest
Advertisement:

Wings of Vendemiaire (Vendemiaire No Tsubasa) is the debut manga by mangaka Mohiro Kitoh, who later went on to create the better known Shadow Star and Bokurano. It is a collection of short stories involving six mechanical puppets that were built to resemble young girls, known as Vendemiaires. It takes place in France both before and after World War I, and starts off when Ray, a young boy, meets Vendemiaire #1 for the first time.

The manga ran in the seinen magazine Monthly Afternoon from 1995 to 1997, and was compiled into two volumes.