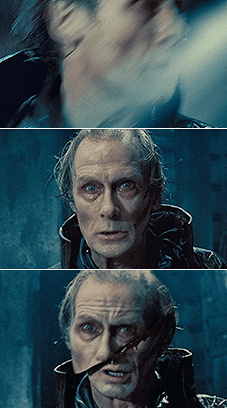 Now that's what I call a splitting headache!
"Aaaand, the split... Any minute now. Damn that must have been a smooth cut, he ain't falling... apart."
— Dr. McNinja, The Adventures of Dr. McNinja
Advertisement:

A swordsman strikes an opponent or other object with a mighty blow. At first, the strike appears to have done nothing and the person or thing looks perfectly intact. A few seconds later, though, the top half of the object begins to slide off the bottom half: through great strength, great skill, an Absurdly Sharp Blade, or the involvement of some kind of magic or Applied Phlebotinum, the sword has made a cut so clean that the object stays together until acted upon by an outside force, such as gravity, a gust of wind, or the victim trying to use their body normally. The initial seam created by the cut might not even be visible to the the naked eye: if it's a person their clothes may look intact, and the wound will not start to open up or bleed until it's revealed to the audience.

A person thus unwittingly cut in half may feel fine at first and laugh at their attacker for missing, until the moment of shocked realization when the two halves of their body slide apart and possibly spout High-Pressure Blood. Although not mandatory, the person who delivered the fatal blow might say "You Are Already Dead" and/or finish sheathing their sword with an audible "click" as the cue for their foe to suddenly fall to pieces.

This trope name comes from the fact that in Japanese media, which furnishes numerous examples, the go-to method of inflicting it on a person is a diagonal downwards strike from shoulder to opposite hip. Setting aside the fact that diagonal sword strikes are Truth in Television for certain practical reasons, a diagonal seam is what allows the target to separate in the most aesthetic way in the context of this trope. For the sake of argument, assume that the sword merely severs the physical connections in its path without disturbing the position or inertia of the two halves it creates. A perfectly horizontal cut would turn the bottom half of the target into a sort of table top which the upper half would stay balanced on instead of falling off, whereas a diagonal cut makes the lower half act as a ramp for the upper half to slide down under gravity. At the same time, a diagonal cut still gives you a clearly distinguishable upper and lower half so that friction on the ramp makes the slide slow enough for dramatic effect, in contrast to a perfectly vertical split where the left and right halves would have no force to slow their separation and would tend to fall apart in a less elegant way.

Please don't take the name too literally, though: a cut that's vertical, horizontal, or indeed any angle qualifies here as long as the effect of the cut is delayed. Conversely, a cut that literally follows a diagonal path but causes immediately visible damage or disassembly is not an example. Something might count as a downplayed case if the severing is immediately obvious, but still causes less of a structural collapse than expected: for example, if a person is instantly killed by beheading, but the head is moved so little by the blow that it remains balanced on top of the neck.

This trope has a lot of Artistic License – Physics and sometimes Artistic License – Biology associated with it. For example, as long as the edge is sharp enough the actual thickness of the blade is totally ignored. A BFS several centimeters thick can leave a cut as invisibly thin as monomolecular Razor Floss, even though logically it would have to displace a lot of material in order to pass through it. Likewise, the actual depth of the object that's being sliced never affects the outcome of this move. It's possible to cut all the way through items whose thickness greatly exceeds the length of the swordsman's blade, such as cars, giant sequoias, or in extreme cases entire buildings. See the Analysis section for a discussion of the mechanics.

The Diagonal Cut frequently happens in a Single-Stroke Battle with blades, although it also happens to inanimate scenery, especially if a warrior recieves an Absurdly Sharp Blade and decides to test it on whatever target comes to hand. A regular Clean Cut is when you have an object neatly sliced apart without the delayed reaction. Razor Floss and other Sharpened to a Single Atom weapons tend to deliver a Diagonal Cut once per show for extra shock value and/or bonus awesomeness, with Clean Cuts used the rest of the time.

For a plentiful source of video examples, check out this "Cut/Slide" reel

compiling many clips of the diagonal cut being inflicted on people in action and horror films. Be warned, however: four minutes of people getting sliced up and then slowly falling apart while still conscious can be pretty stomach-turning. However, it may also be a hilarious demonstration of how this trope is harder to show convincingly in live action than in animation. Further, it shows that something used too often can lose its effect very quickly.

The Katana Lvl.3 attack involves Mike cutting through the machine diagonally as the screen goes black, plus the cut goes through something else as well.

The Katana Lvl.3 attack involves Mike cutting through the machine diagonally as the screen goes black, plus the cut goes through something else as well.