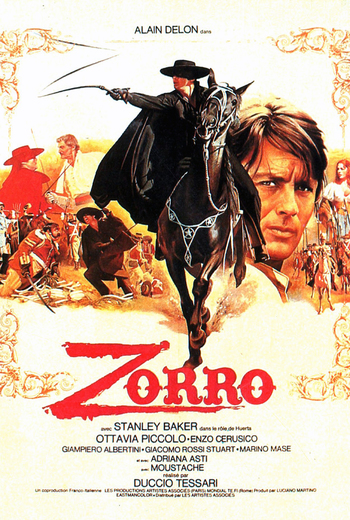 Zorro is a 1975 French-Italian Swashbuckler film directed by Duccio Tessari, based on the literary hero of the same name.

Alain Delon is Diego, a Spanish master swordsman, expert horse-rider and adventurer who is visiting the New World and staying with his friend, Miguel de la Serna, the soon-to-be assistant governor of Nueva Aragón. But after witnessing Miguel's death by a band of thugs, Diego decides to stay and investigate the truth behind his friend's assassination by taking over Miguel's position as assistant governor.

Discovering that Nueva Aragón is ruled by a ruthless military leader, Colonel Huerta, and learning of an old legend about a black fox spirit who will save the locals of Nueva Aragón, Diego decide to become the legend himself, as Zorro, the black-clad crusader and saviour of the people.