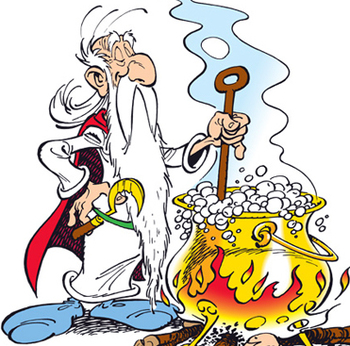 Getafix, with his tool of choice, the golden sickle.
Advertisement:

Devotees of old gods often carry small sickles, which are reminiscent of both plants (sickles were originally farming tools) and the moon (the blades are crescent-shaped). They can be seen as weapons, or simply as tools that happen to come in handy for self-defense. These knives are especially common among priestesses; a male character with such a weapon is, however, more likely to be explicitly called a druid, rather than simply a pagan priest. In these cases, the blade will often be explicitly meant for the harvesting of mistletoe, although it may still be put to other uses.

Somewhat Truth in Television; many pagan religions include a sickle-shaped work knife called a boline as part of the ritual tools, though it's not generally considered a weapon. The association of sickles with druids and druidic ceremonies in particular stems from the Roman historian Pliny the Elder's description of the ritual of oak and mistletoe

, where druids would use golden sickles to harvest mistletoe as part of an elaborate religious ceremony.

Note that some blades described as "sickle-like" may in fact be examples of or inspired by the Ancient Egyptian khopesh,

A sub-trope of Weapon Specialization. As the name implies, this is often used by Druids.

I hereby consecrate these examples in the names of the Lord and Lady:

Kahmunrah fights Larry with a sickle.

Kahmunrah fights Larry with a sickle.