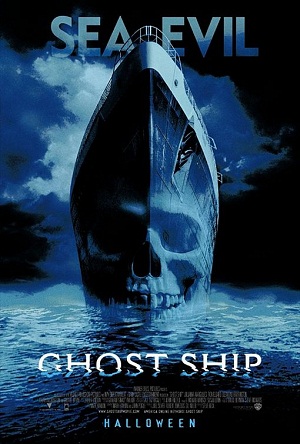 There are two films with the same name, but they are markedly different. This page is about the 2002 film directed by Steve Beck.

In May 1962, hundreds of wealthy passengers enjoy dancing in the luxurious ballroom of an Italian ocean liner, the Antonia Graza, while a beautiful Italian singer (Francesca Rettondini) performs "Senza Fine." Out of the bow of the ship, a smaller gathering of guest dance on a raised platform, when a hand presses a lever that winds up a thin wire cord from a spool. Suddenly, the spool snaps and the wire slices across the dance floor like a blade, bisecting every dancer on the floor. Things fall apart and only little Katie (Emily Browning) — who is dancing with the Captain — are left standing, thanks to her small stature and to the captain leaning protectively over her. She looks up at the Captain's face, which splits open at mouth level as the top of his head falls off. Katie screams at the unbelievably horrific scene as the ship disappears never to be seen again.

In the present day, a salvage crew — Captain Sean Murphy (Gabriel Byrne), Maureen Epps (Julianna Margulies), Greer (Isaiah Washington), Dodge (Ron Eldard), Munder (Karl Urban) and Santos (Alex Dimitriades) — is celebrating a recent success at a bar, when Jack Ferriman (Desmond Harrington), a Canadian weather service pilot, approaches them and says he has spotted a mysterious vessel running adrift in the Bering Sea. Because the ship is in international waters, it can be claimed by whoever is able to bring it to a port. The crew soon set out on the Arctic Warrior, their ocean salvage tugboat. While exploring the abandoned ship, they discover that it is the long-lost Antonia Graza. When they board the ship and prepare to tow it to shore, strange things begin to happen. Epps claims to have seen a little girl on the stairwell. Greer claims to have heard the singing of an unseen songstress throughout the ship. Epps and Ferriman discover the corpses of another salvage crew. They decide to leave the ship but take the large quantity of gold that they find on board. Katie tries to warn the crew that the Arctic Warrior has been sabotaged, but the tug explodes as the engine is started, killing Santos and leaving the rest stranded on the ship.

And then things start to go from bad to worse.