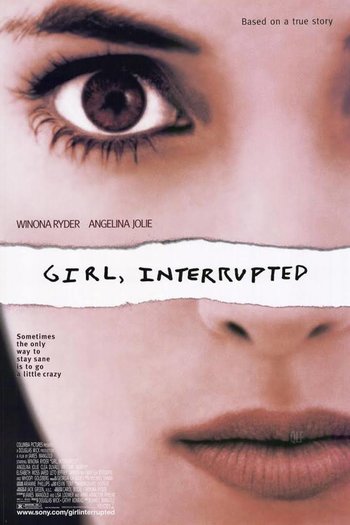 Sometimes the only way to stay sane is to go a little crazy.
Dr. Crumble: Susanna, four days ago you chased a bottle of aspirin with a bottle of vodka.
Susanna: I had a headache.
Advertisement:

Shortly after her high school graduation and a subsequent suicide attempt (probably), upper-middle-class Susanna (Ryder) is admitted to Claymoore Psychiatric Hospital, where she meets and in some cases befriends other young, female patients, most notably Lisa (Jolie), the charismatic ring leader. The group rebels against the oppression of institutionalized life, going bowling in the basement at night and breaking into the doctor's office to read their case files. Susanna is diagnosed with borderline personality disorder, Lisa is a sociopath, Georgina (DuVall) a compulsive liar, and the saccharine Polly (Moss) a disturbed burn victim. Other patients count an anorexic called Janet, a butch lesbian called Cynthia — homosexuality still being regarded as a mental disorder at the time — and the hostile Daisy (Murphy), who's dealing with an eating disturbance of her very own and is somewhat at odds with Lisa.

After some rule breaking and conflicts with the staff that leads to Lisa being taken away for electroshock treatment, she and Susanna escape one night. It ends up being a rather short trip during which Susanna becomes disenchanted with Lisa and voluntarily returns to Claymoore. Lisa is later returned too, less voluntarily and in a pretty bad state. Susanna, in the meantime, has recovered and is preparing to leave the institution, which leads to a final showdown between her and Lisa.

Jolie won quite a few awards for her supporting role, among them an Academy Award and a Golden Globe.

Tropes evident in Girl, Interrupted include: