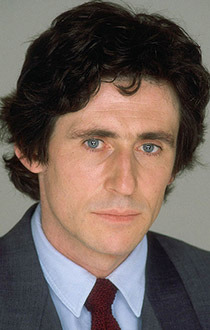 "I would like to break out of this dark, brooding image, cause I'm actually not like that at all."
Advertisement:

He has also been an archaeologist, a cook, a bullfighter, and a Spanish schoolteacher.

Byrne's known television work included the HBO drama In Treatment, for which he was nominated for two Emmys, and won a Golden Globe.

He was married to Ellen Barkin from 1988 to 1996. He speaks fluent French and Spanish.

He can qualify as either the modern day Roddy McDowall or David Warner due to Byrne's Celebrity Resemblance to the two actors from the previous generation of actors before him and the similar roles they play such as Byrne's hammy role as Satan in End of Days being a reminiscent of the villains played by Warner and McDowall, his Nazi character of Major Kaempffer in The Keep being seen as an Expy of Warner's portrayal of Reinhard Heydrich from Holocaust and Hitler's SS: Portrait in Evil and his most recent role as Steve Graham in Hereditary being something of a Spiritual Antithesis Agent Scully Foil to Warner's Agent Mulder role as Keith Jennings in another supernatural horror/family tragedy film The Omen (1976), not to mention both Byrne and McDowall being both of Irish descent.