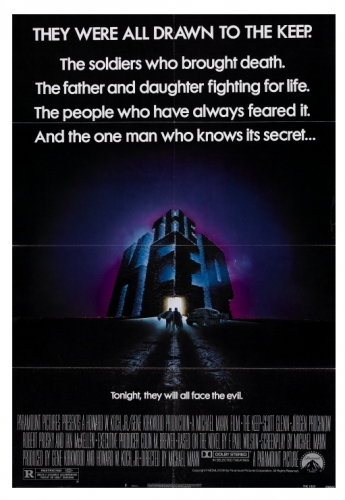 The Keep is a 1983 horror film, based on the first novel in The Adversary Cycle by F. Paul Wilson. Starring Jürgen Prochnow and Scott Glenn, with early appearances by Ian McKellen and Gabriel Byrne, it was directed by Michael Mann.

In 1941, a group of German soldiers are sent to guard a village near a mountain pass in Romania. Their leader (Prochnow) set up their headquarters in a citadel, the Keep. After accidentally unleashing an evil being, named Radu Molasar, reinforcements are sent with an SS Einsatzkommando led by Major Kaempffer (Byrne) but ultimately, the Germans are forced to seek the help of a Jewish history professor, Theodore Cuza (McKellen), who unsurprisingly ends up allying himself with the evil entity because he sees it as a means of ridding the world of Nazism. Meanwhile, a mysterious stranger (Glenn), with some connection to the Keep, shows up to interfere with whatever it is Molasar's got cooking, and to fall for Prof. Cuza's hot daughter, Eva (Alberta Watson).

The Keep is a very strange and confusing - but not entirely bad - film. It is typical of Mann's directorial style. Though it featured an impressive cast and some good special effects, studio-enforced editing gutted the film and the untimely death of special effects supervisor Wally Veevers necessitated a completely different ending. The Keep bombed, and bombed hard. Nevertheless, it has gained a cult following in the ensuing years, thanks mostly to its soundtrack by Tangerine Dream, but also due to its interpretation of Molasar, as well as the rare mix of Gothic Horror with World War II.