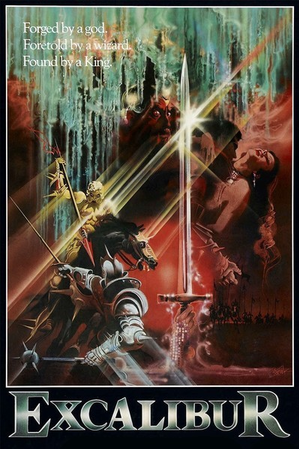 "I've often thought that in the hereafter of our lives, when I owe no more to the future and can be just a man... that we may meet. You'll come to me, claim me yours, and know that I am your husband. It is a dream I have."
— Arthur to Guenevere
Advertisement:

A 1981 Heroic Fantasy film directed by John Boorman, an epic, Cult Classic retelling of the Arthurian myths. Notable at least for two aspects:

Being largely based on the Arthurian chivalric romances, the film has major elements of later Romanticism; it understandably and unashamedly yearns for the nobility and virtue of Arthur's court, and explicitly states that Arthur serves as an example from the past to future memory; though it leaves open the chance that one day humanity may once again return to Camelot's height.