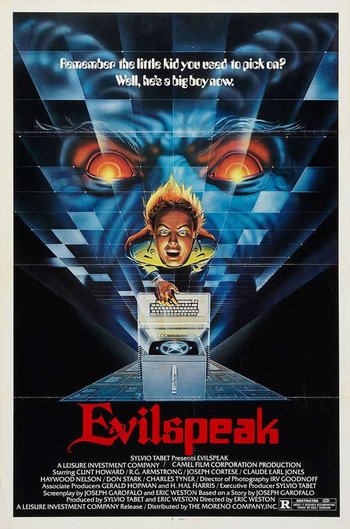 Watch out, Clint Howard has been powered up by Satan and he's out for blood - literally!
Advertisement:

Evilspeak is a horror movie from the year 1981.

Things suck for Stanley Coopersmith (Clint Howard). He's a welfare student for a military school and is basically at the bottom of the pecking order. One day it all changes when he is given a punishment duty of cleaning the academy's chapel's basement. There he discovers belongings of late Father Esteban Lorenzo (Richard Moll), who was exiled from Spain for Satanism in the 16th century. Coopersmith then starts studying Lorenzo's material and later uses his newly gained power to turn the tables against his tormentors.

Examples within this movie: