Film / The Evil That Men Do 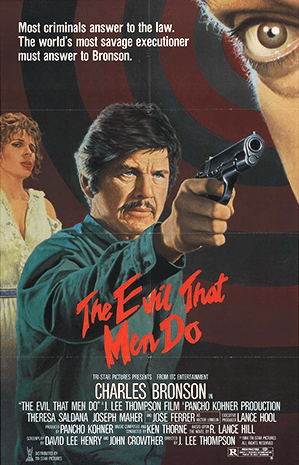 The Evil That Men Do (1984) is an action/psychological-drama starring Charles Bronson and directed by J. Lee Thompson.

Bronson plays Holland, an ex-CIA agent summoned out of retirement to assassinate Dr. Clemente Molloch (Joseph Maher), the quintessential Torture Technician. Accompanying him is the wife (Theresa Saldana) and daughter of one of Molloch's recent victims.

Perhaps best known for the scene in which Bronson brutally crushes both the windpipe AND joypipe of Miguel Angel Fuentes, who is himself perhaps better known to MST3K fans for his role as the guardian Vadinho in The Pumaman.

The Evil That Men Do provides examples of the following tropes: