Film / The Evil Within 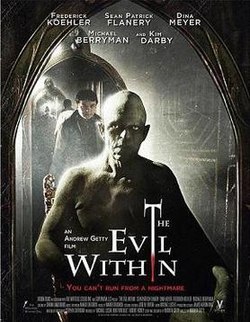 You can't run from a nightmare
Advertisement:

The Evil Within is a 2017 Horror Film written and directed by Andrew Getty, based on his childhood nightmares.

The film follows Dennis Peterson (Frederick Koehler), a special-needs brother who lives with his brother and caretaker, John (Sean Patrick Flanery). John loves Dennis, but is getting increasingly stressed over the difficulty of taking care of his brother, combined with the stress of his girlfriend, Lydia (Dina Meyer), and Mildy Torres (Kim Darby), a social worker, who are both pressuring him to put Dennis in a state home, albeit for different reasons. Dennis suffers from incredibly vivid nightmares with uncertain beginnings and ends, where he is fully articulate, and pursued by a cadaverous figure (Michael Berryman). John puts an antique mirror, found in a Prohibition Vault in the basement, into Dennis's room and Dennis, recognizing the mirror from his dreams, begins talking to it, and it begins to talk back, telling him that he's being tested and that he needs to prove himself... by killing.

This film should not be confused with the video game series, The Evil Within.