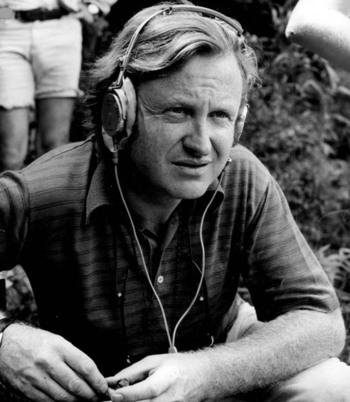 Sir John Boorman (born 18 January 1933) is an English filmmaker. Starting out in the fifties as a BBC television and documentary filmmaker, Boorman entered the film industry in 1965 with Catch Us If You Can, a kitchen sink drama featuring the music of the Dave Clark Five. He made it big with 1972's Deliverance, a controversial yet wildly successful film which gave him Auteur Licence and Academy Award nominations for Best Picture and Best Director. His next project, the infamous low-budget 1974 Sean Connery-starring Zardoz, was... less successful. He wouldn't have another major critical and commercial success until 1987's Hope and Glory, for which he was nominated for three more Oscars. Other Boorman films include Exorcist II: The Heretic and the Arthurian fantasy epic Excalibur. Boorman is often counted among the New Hollywood generation of directors.
Advertisement:

His son, Charley Boorman, starred in a number of his films before becoming better known as an adventurer appearing in travelogues like Long Way Round.