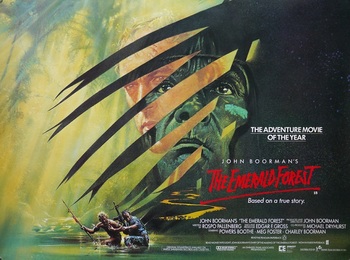 A 1985 film directed by John Boorman and starring Powers Boothe, Very Loosely Based on a True Story.

Bill's son is kidnapped by an Amazon tribe. Bill tried to pursue but lost them in the jungle. Over a decade later, he tries to arrange an expedition to find his son. The results are a disaster. His partner is eaten by cannibals and he flees only to find his son as one of the natives trying to kill him.

Tommy, now a young man, recognizes his father and helps him escape. Tommy takes him to friendly natives who care for Bill. Bill learns of how completely Tommy has transformed into a tribal man speaking their language as if it was native and as if his father's language was foreign. Then the tribe drugs Bill and takes him back to civilization. Bill wakes up with no clue where his son is.

The Emerald Forest contains examples of: