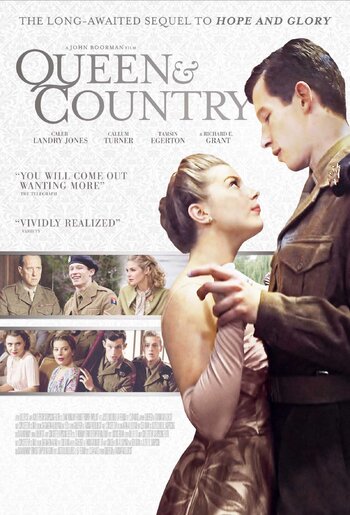 Queen and Country is a 2014 British historical drama directed by John Boorman, and is the last film he has directed as of 2021. It is a loose sequel to his 1987 semi-autobiographical Hope and Glory, returning to the same lead character and his family several years later, mostly played by different actors, and introducing a number of new characters as well. The two films are sufficiently independent so that one doesn’t need to watch them both in order for context.

Bill Rohan (Callum Turner) fulfills his National Service requirement by enlisting in the Army. He and his friend Percy Hapgood (Caleb Landry Jones) are promoted to sergeant and assigned to teach typing to new recruits. They wind up locking horns with their superior, Sergeant-Major Bradley (David Thewlis), a World War II veteran and stickler for rules. Bill is charged with subverting morale by telling his pupils some discouraging facts about The Korean War then raging. His case is thrown out when he demonstrates that everything he said had previously been printed in The Times. Percy is less fortunate after the two of them and mischievous orderly Redmond (Pat Shortt) concoct a plan to steal a mess clock given to the regiment by Queen Victoria.

Off the base Bill falls in love with the mysterious Ophelia (Tamsin Egerton) while Percy takes up with impish nurse Sophie (Aimee-Ffion Edwards). For varying reasons neither relationship quite works out, but Bill’s older sister Dawn (Vanessa Kirby) also enters the picture.