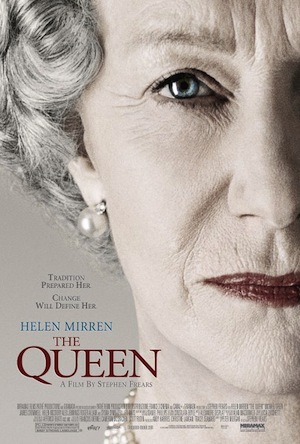 An award-winning 2006 British drama film directed by Stephen Frears, about how the popular and media reaction to the death of Diana, Princess of Wales came to shape the relations between The British Royal Family and the Blair government, with the main focus on the developing relationship between Queen Elizabeth II (Helen Mirren) and new Prime Minister Tony Blair (Michael Sheen).

Surprisingly low on actual Diana-presence (occasional bits of archive footage only), and generally treats all the characters rather more sympathetically than might have been expected, including such stock figures of media fun as Charles and Philip, and for that matter Tony Blair — Cherie Blair, however, is as smugly derisive as one would expect.

Mirren's performance in the title role was highly praised and earned her multiple awards, including the Academy Award for Best Actress.

The same production/writing/director team having made a previous film about Blair starring Sheen, 2003's The Deal (2003), The Queen is now retconned viewed as the second installment in the "Blair Trilogy", which was concluded by The Special Relationship (about Blair and Bill Clinton, with some Blair/Bush towards the end) in 2010. It can also be seen as the first instalment of a Peter Morgan-penned cross-medium "Elizabeth II Trilogy" consisting of The Queen, the 2013 play The Audience (portraying Her Majesty's audiences with her various Prime Ministers over the years), and the 2016-present television (well, "television") series The Crown (portraying Elizabeth II's whole reign).