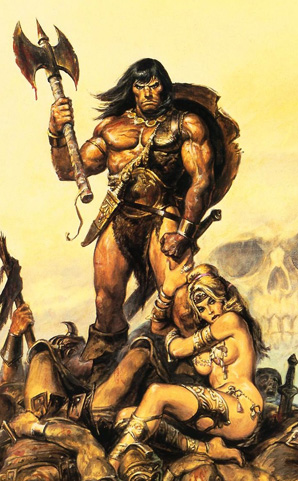 "Seriously, lady, let go."
"At a respectful invitation from Hadrathus he seated himself on an ivory chair, and motioned Albiona to another, but she preferred to sit on a golden stool at his feet, pressing close against his thigh, as if seeking security in the contact."
— The Hour of the Dragon
Advertisement:

A Film Poster Trope that has ties to old pulp comics or adventure book covers. It depicts a muscle-bound man in a dominant pose, with an attractive woman literally clinging to one of his legs. After all, Men Are Strong, Women Are Pretty. The man is always a Hunk (handsome and manly), and very often is depicted shirtless (or with his shirt torn open), to reinforce how tough he is, with a cocky expression on his face and a Phallic Weapon on one hand, even maybe stabbing the sky. Very often he's Atop a Mountain of Corpses, or viewed from a low angle atop a throne to make him look even more intimidating than he already is. Meanwhile, the woman is almost always half-naked in a sexualized manner, with a helpless expression and posture that reinforce her submissiveness. The contrast between the male and female characters alludes to the notion that men are defined by their actions and women by their passiveness. The pose was popularised at a time when oral sex was widely known but considered unmentionable, indecent, and grounds for divorce, making it ripe for encoding.

Sometimes it's more than just one woman at the man's feet, invoking A Lady on Each Arm trope.

Given gender double standards about dominance and submissiveness, it is almost always (if not all of the time) a man who's standing tall, and a woman at his feet.

(Warning: it's even less safe for work than the picture to the right.)

Variants without the Leg Cling