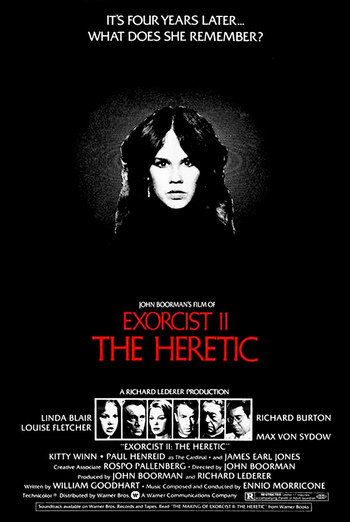 Exorcist II: The Heretic is a 1977 supernatural horror film and the first sequel to The Exorcist. It was directed by John Boorman.

Father Lamont (Richard Burton), about to lose his faith in God, is persuaded by the Vatican to investigate the death of Father Merrin (Max von Sydow, who appears in flashbacks) during the exorcism of Regan MacNeil (Linda Blair) four years earlier. His quest leads to the now-16-year-old Regan, who has no recollection of her demonic possession but is plagued by nightmares and is being treated by a psychiatrist, Dr. Gene Tuskin (Louise Fletcher). Upon observation, Lamont is convinced that Regan is a faith healer and explains why she might have been possessed in the first place. Lamont then visits Africa to meet Kokumo (James Earl Jones), another victim of possession, who helps explain what attracts evil towards good and good towards evil.

All of this is explained in one of the trippiest and most bizarre films ever put to celluloid.