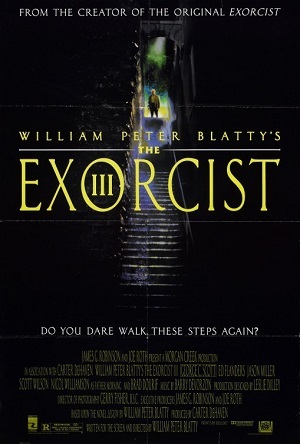 "I have dreams... of a rose... and then of falling down a long flight of steps..."
— Opening narration
Advertisement:

The Exorcist III is a 1990 supernatural horror film and the second sequel to The Exorcist. It was written and directed by William Peter Blatty, the author of the original 1971 Exorcist novel, and based on his 1983 sequel novel Legion.

Set fifteen years after the original film (and ignoring the events of Exorcist II: The Heretic), the film centers on a character from the first film, Lieutenant William F. Kinderman (played by George C. Scott this time around), as he investigates a baffling series of murders in Georgetown that appear to have a satanic motive behind them and furthermore have all the hallmarks of "The Gemini" (Brad Dourif), a deceased serial killer.