Film / Night of the Demon 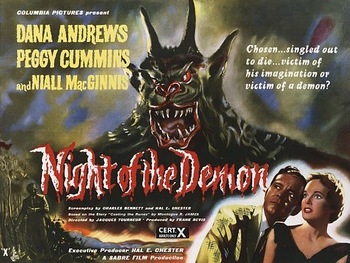 The plot involves Dr. John Holden (Andrews), a visiting American psychology professor, and his attempts to put down an English devil-worshipping cult led by the evil but charming Julian Karswell (Niall MacGinnis), who is able to use Celtic runes to summon a demon to attack his enemies. Of course, Karswell is able to slip some runes on Holden, who must try to avoid death at the demon's scaly hands. Holden enlists the aid of Joanna Harrington (Peggy Cummins), the niece of a rival of Karswell's who had died under suspicious circumstances.

The script is very intelligent, the characterizations are awfully good, and it's got a slew of creepy moments and excellent suspense. The demon is well done, and the other effects, though not particularly fancy, do a good job of ramping up the fright.

Night of the Demon provides examples of: