Film / The Night of the Generals 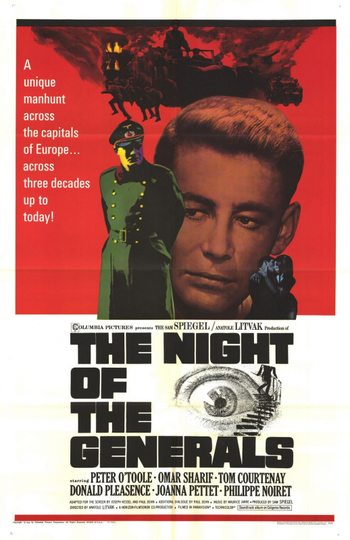 The Night of the Generals is a film based on the novel of the same name by Hans Hellmut Kirst. It was directed by Anatole Litvak and released in 1967. It's both a war movie and also a murder mystery (in theory, although the killer's identity is immediately obvious).

The story concerns the murder of Polish prostitute Maria Kupiecka in Nazi-occupied Warsaw. Ordinarily this wouldn't be of much importance to either the German occupiers or the local Polish police, but for two things: firstly, investigating German Intelligence officer Major Grau (Omar Sharif) is obsessed with the idea of justice for all ("Justice can sometimes hear the cry of a murdered woman," he insists), whether prostitute or not, and secondly, Maria happened to also be cooperating with the German authorities, meaning Grau has another incentive to find her killer.

There was only one witness, a fellow tenant in Maria's apartment building. He only got a glimpse of her killer: whoever he was, he was wearing a Wehrmacht uniform with a red stripe down the pants legs. Grau, intrigued, realizes only German generals have red stripes on their pants. A highly skilled investigator, he quickly narrows his list of suspects down to three officers who have no alibi: Herbert von Seidlitz-Gabler (Charles Gray), his aide Klaus Kahlenberge (Donald Pleasence), and the recently arrived Wilhelm Tanz (Peter O'Toole). All of them claim innocence, but Grau is driven by a desire to see the killer brought to justice, as he is disgusted that they are hiding behind their rank. Grau is ultimately reassigned to Paris when his investigation comes too close for comfort.

The second half of the movie moves to Paris in July 1944. The war is turning against the Nazis and several of the main characters become involved in Claus Von Stauffenberg's plot to overthrow Hitler, complicating Grau's murder investigation. He makes a deal with French Inspector Morand (Philippe Noiret), agreeing to release French resistance fighter in exchange for assistance. After another prostitute turns up dead, Grau decides to arrest his culprit amidst the chaos of the attempted anti-Nazi coup.

The movie was notable in its time for its All-Star Cast and extensive location shooting; notably, it was the first Western production to film in Warsaw during the Cold War. Unfortunately the production was rather tumultuous: shooting began without a finished screenplay, with producer Sam Spiegel bringing in numerous script doctors (notably Gore Vidal and Robert Anderson) for rewrites while the movie was in production, and his domineering producing style aggravated both director Anatole Litvak and the cast members. Though the movie received respectable critical reviews, it flopped at the box office and became one of Spiegel's least-successful movies.