Film / Night of the Big Heat 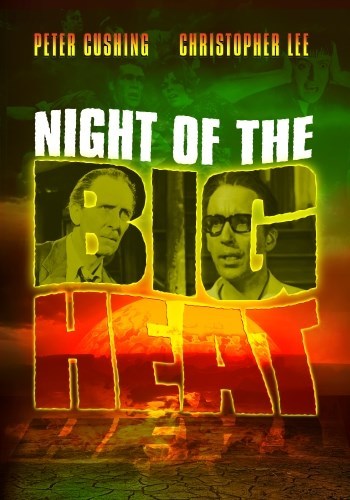 Night of the Big Heat (also known as Island of the Burning Damned) is a 1967 British Sci-Fi Horror film directed by Terence Fisher and based on the novel of the same name by John Lymington.

Starring Hammer Horror veterans Peter Cushing and Christopher Lee, the film's story centres around two scientists, Dr. Vernon Stone (Cushing) and Dr. Godfrey Hanson (Lee), investigating a mysterious heat wave that has struck the remote Scottish island of Fara, causing unseasonably warm temperatures and everything that comes with them. It is eventually revealed that the weather abnormalities are being caused by alien invaders who emit massive amounts of body heat and are using the island as their base of operations. Meanwhile, there's a bit of domestic drama involving novelist Jeff Callum (Patrick Allen), his wife Frankie (Sarah Lawson), and his secretary Angela Roberts (Jane Merrow). Jeff and Angela are former lovers, and she wants to rekindle their romance despite him not only being married but also wanting absolutely nothing to do with her.

Tropes of the Big Heat: