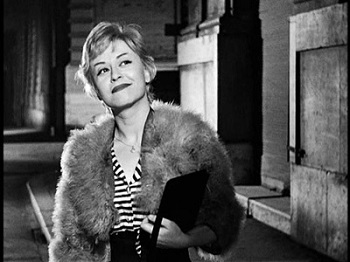 Nights of Cabiria is a 1957 film directed by Federico Fellini.

It deals with Cabiria, a hooker in the suburbs of Rome, and her weird experiences, including almost being drowned by a man, going to a progression, meeting a famous actor, and wondering if she should change her ways. She tries again and again to change her life for the better, but never has any luck. The problem is that she is a fairly idealistic person against a very cynical world.

Fellini's wife, Giulietta Masina, stars as Cabiria. One of the earlier films produced by Dino De Laurentiis. Adapted by Neil Simon into the musical Sweet Charity, which was itself adapted into a movie in 1969.