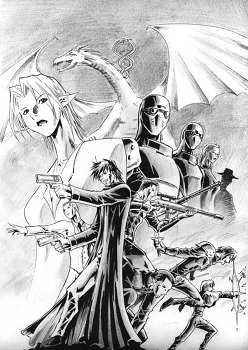 Serge and Friends
"Forces are gathering from all corners of the multiverse preparing for war, and Serge is right in the middle. Fortunately for him, that's just the way he likes things."

is a thrice-weekly webcomic chronicling the stories of extraordinary people living across the connected planes–a collection of worlds that are interconnected by the Interplanes, the time and space coordinates of least resistance. The worlds each have their own quirks and idiosyncrasies, but the common thread throughout all of them is the presence of magic, a force that people study and manipulate to do everything from hurling fireballs to teleporting across the multiverse.

Zokusho is "Dungeons and Dragons in a modern setting, as imagined by a guy who watched way too much anime growing up.” If that sounds like something you’d be interested in reading, check with us every Monday, Wednesday, and Friday to see the continuing stories.

The story is divided into "issues". They are...