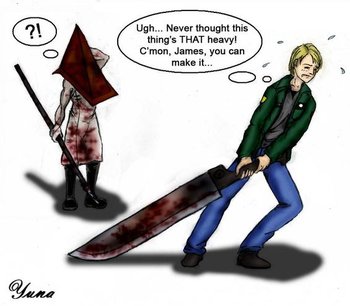 A character that carries a sword will, at some point, drag the tip of the blade across a floor or wall. This is usually done to intimidate or to catch the attention of another character, or simply to invoke the coolness factor, but rarely does it have any practical application. It can also be associated with an Ax-Crazy character or a Villainous Breakdown, because if someone holding a sword goes into a Primal Stance or becomes Limp and Livid, they tend to forget they're holding it and just let it drag. Or it might just be that they can't actually lift the sword for any length of time, either because they're tired, the sword is too big, or the sword is just that heavy.

It generally causes Swirling Dust and Sword Sparks, but with the floor, not another sword. Might also be the source of a Sinister Scraping Sound.

Naturally, this would be a terrible maneuver to use in real life as it would wear down any good sword, slow down the wielder, and telegraph the coming attack obviously. Thankfully in fiction, we have the Rule of Cool to make up for that. No, this is not about drag queens armed with swords.

Catherine drags an axe across the floor.

Catherine drags an axe across the floor.