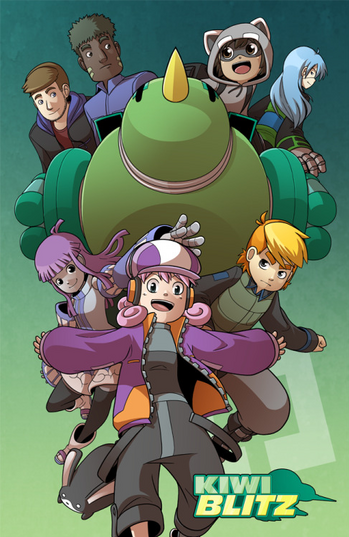 "Maybe you haven't heard... but this is my show. And it's the kind where nobody dies."
— Blitz
Advertisement:

is a Webcomic by Mary Cagle (known elsewhere on the net as one of a number of variations of "Cube Watermelon"). It usually updates on a weekly or biweekly schedule, depending on how busy the watermelon is.

The main character is 14-year-old Steffi Frohlich, who under the guise of "Blitz" fights crime in a future New York City using her bird-shaped Mini-Mecha, Kiwibot. She's assisted in this by her best friend Benzene, her billionaire father, and a Robot Girl named 42. Of course, that's just what she does during her free time, when she's not busy with her day job as a junior Robot Battle League combatant.

Along with the ill-equipped NYPD, Steffi/Blitz battles masked criminals, rogue military hardware, and most importantly, her own boredom.

The current Tracks are, in order...