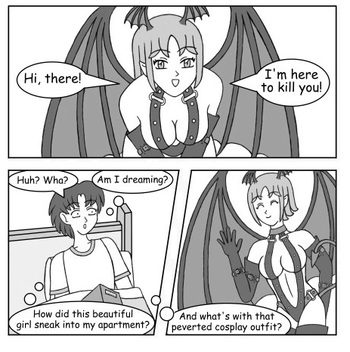 "Hi, there! I'm here to kill you!"
Advertisement:

Ken Iwakami, college student, hopeless in love, and general slacker awakes to these words and finds that Kumiko, a succubus, has chosen his soul to devour.

In desperation, he claims he doesn't want to die a virgin and she agrees to his request. Shortly afterward, she finds that she kind of likes this "sex" thing, and the process thereof has allowed her to eat a small amount of his soul.

Thus, she decides to make him her property, complete with marking him and attaching a magical leash to his neck that keeps him from getting more than ten feet away from her.

Add in an angel with a history with Kumiko, a long-dead ancestor of Ken, an insanely jealous judo girl, and a Nazi physics professor, and wacky hijinx ensue.

The original website disappeared years ago, but the first several chapters can be found on Fiction Press

and The Vanished FanFic Archive