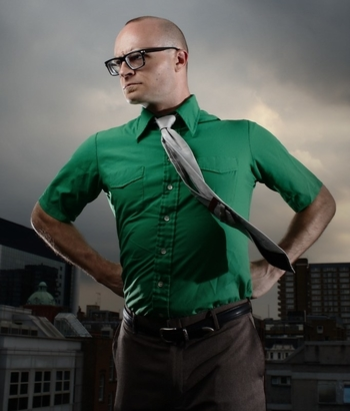 ''You got MC confusion? I’m Frontalot!
If I were MC Frontalittle I’d be telling you only ever what I’m not,
but I am the most frontingest.
Carving off the obfuscation, little something just
to confuse you with. And like a villain,
I got conundrums. your empty head they gonna fill in.
Still in effect, the mock you made:
my dexterity ain’t 20 when the skills are displayed?
It’s alright, I took it as a compliment.
Advertisement:
Shows you know nerdcore’s extent.''
— "Which MC Was That?"

MC Frontalot, real name Damian Hess (born December 3, 1973), is a nerdcore hip-hop rapper. What is nerdcore, you may ask? It's simply normal hip-hop, but focused on nerdy pop culture (Star Wars, Dungeons & Dragons, Zork, etc.). While a lot of nerdcore music has come before him, Frontalot made it more well-known with his frequent appearances at PAX.

Frontalot started out with a small audience; he originally made songs in an online competition named Song Fight. He entered through many names, but his "MC Frontalot" username never lost a single competition. And, as anyone would tell you, he was good. So much so, one of his songs in Song Fight scored 614 votes. What was the closest after that? 28.

After his Song Fight popularity, MC Frontalot released his first official song, titled "Nerdcore Hiphop". Every geek, nerd, and pop culture fan loved his idea of rapping, but with a different theme. Remember that whole "he created nerdcore" thing mentioned previously? "Nerdcore Hiphop" is the song that allegedly named and started it, but again, Frontalot himself said that there's been plenty before him.

He was listed on the character page for Overcompensating.

While he did make a demo album, MC Frontalot released his first official album, Nerdcore Rising, in 2005. This contained songs he had previously released on his website and six new songs made for the album. Of course, Frontalot's still alive and kicking, releasing albums and making appearances today.