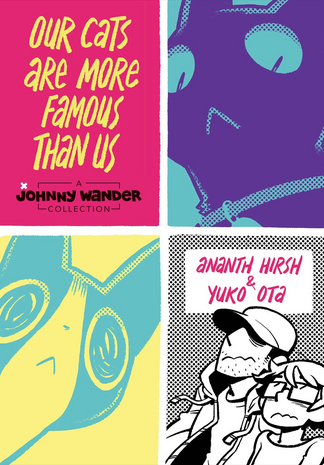 "Johnny Wander might be about life after college, being a kid, growing up and all the people you meet and all the things that happen in that brave new world.

Or it might be about something else entirely."
Advertisement:

is a Slice of Life webcomic by Yuko Ota and Ananth Hirsh. The comic mostly follows the everyday lives of Yuko and company after graduating college, but since September of 2009, they have started putting up short comics with an Urban Fantasy theme on occasion.

Ananth, a self-proclaimed comics nerd, whose hat always covers his eyes. Even when he's not wearing it.
Yuko, a small girl who is often mistaken for a boy, and is "internet famous"note sorta. Can also fit inside a dryer.
Conrad, an exhibitionist who likes to eat breakfast 24/7. Also has a very suspicious hairdo.
John, a mildly ornery tallish fellow who likes to clean.
Steve, a DJ who's skillful with bass.
Mike, a musician who can be stopped with shellfish and/or bullets.
Rook: Yuko's (very talkative) cat. Meow meow meow meow meow meow. Not a real cat.
Gonta: Yuko's dad's cat. Likes to fret.
Mika: Yuko's mom's cat.
George: smiles all the time.
Lela: who likes dogs and cooking.
Cricket: the laundry kitten. Chirrup.

The main comic contains examples of: