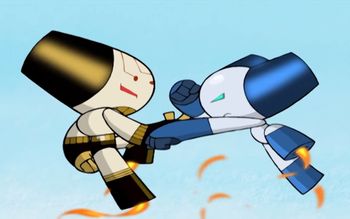 35: You may be a newer model, but you can't defeat me in physical combat. [...] You can't outrun me.
42: Your use of absolute phrasing risks inaccuracy.
— Kiwi Blitz
Advertisement:

One side has the latest technology at hand, which corrects past mistakes and improves their capabilities. It might even be custom-made for certain people. The other side ends up with the older (at times the Mark I) version of the technology for various reasons (incapable of upgrading, being good enough, having attachment to it etc).

And they meet each other. Then comes the thing: the two will inevitably be compared with each other for accomplishing their generally similar tasks, often (but not always) by fighting each other.

Which will come out on top? It depends: the "prototype" side will likely theoretically be at a disadvantage due to having flaws and/or plain quantitatively underperforming (because it was made earlier, with less advanced technology) compared to the "upgrade" side. In practice, the "prototype" side almost always wins, either because the user's skill matters more (if the "prototype" user is more skillful and experienced compared to the "upgrade" user) or the "upgrade" being actually worse (perhaps due to being manufactured in a less-than-ideal way, or having had too-costly features removed for mass production). The prototype winning in almost all cases is a bizarre manifestation of the Older Is Better trope. Part of it is simply that by nature, the prototype is the underdog, and Underdogs Never Lose.