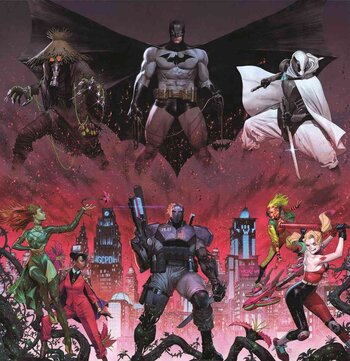 In the aftermath of The Joker War and the horrific A-Day bombing of Arkham Asylum, Gotham City is in a state of panic. To this end, Simon Saint and Saint Industries have stepped in to help bring a state of peace with the Magistrate with Sean Mahoney, a survivor of A-Day, becoming Peacekeeper-01 to lead a new group known as the Magistrate. Thanks to actions performed behind the scenes, Saint is seeking to push Mayor Nakano to accept the Magistrate to protect Gotham. However, not everyone is keen to this idea.

Jonathan Crane, the Scarecrow, has found that these actions are pushing Gotham into a heightened since of fear. This is something he wants, he enjoys. And thanks to a new dosage of Fear Toxin, he has turned Peacekeeper-01 into a fear-driven madman.

This is not a Future State anymore. This is now a Fear State. To try and save Gotham, Batman will need all the help he can get and one man may become The Next Batman.

Tropes Used in this Event: