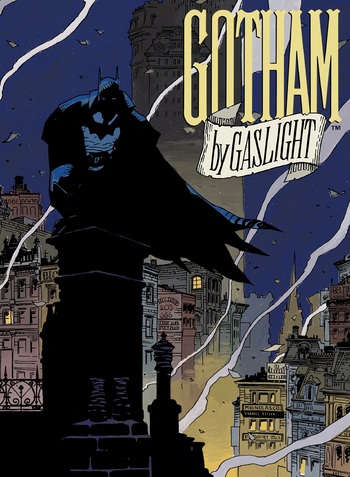 Gotham by Gaslight is an Elseworlds story written by Bryan Augustyn and penciled by Mike Mignola, and the first Alternative Continuity Graphic Novel in being officially considered one. Taking place in 1889 in a Victorian-esque Gotham City, it follows the story of how Bruce Wayne became Batman in an age without modern technology, learning from Dr. Sigmund Freud and training under Sherlock Holmes. During this time, he investigates the brutal murders of one Jack the Ripper.

Despite not being sold often, the series has had a good standing amongst fans and creators, even gaining a sequel entitled Master of the Future. The costume has appeared in several games as a popular alternate costume for Batman and even had its own senario in the Infinite Crisis video game. It was ranked #13 on IGN's Greatest Batman Stories.

It also has an Animated Adaptation called Batman: Gotham by Gaslight as part of the DC Universe Animated Original Movies line.