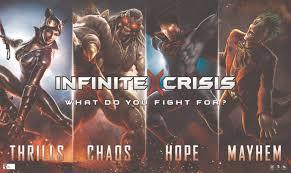 A sudden assault threatens the DC Multiverse. All realities stand on the brink of annihilation. Now, the last hope for Earth lies in the powers of the DC legends.

Infinite Crisis, while potentially referring to the series of comics from the same franchise, was also a Multiplayer Online Battle Arena game for PC, developed by Turbine and published by Warner Bros. Interactive Entertainment, running for only five months in 2015. Different DC characters battled it out on objective based maps. The gameplay? Essentially League of Legends with some small tweaks, some imaginative champion kits, and a coat of DC paint. You might hear that comparison a lot, as a lot of the game's design choices pretty much come straight from that game.

The game's initial mode was "Gotham Heights", based on dominion. Five control points scattered the map, and while weaker drones did their part to push towards them, it was the task of two teams of five champions to battle it out to control the majority of the points long enough to destroy the enemy team's core. Their extra take on this was the 'orbital cannon'. Every now and then, a sixth control point opened up; capturing it deployed more powerful drones to help capture points, and bombed the area with meteors, making it harder for the enemy team to navigate down beneficial paths.

Since release, they also added "Coast City", a two-lane map with a slightly similar gameplay to League's Twisted Treeline in a different layout, "Gotham Divided", a three-lane map that actually had both unique layout and mechanics, and "Crime Alley", a 1 vs 1 or AI bot map used for practice or duels.

One more thing worth mentioning about the game is that, true to the theme of Infinite Crisis, you had access to champions from different universes, which in this game were separate characters from their Prime universe counterparts, playing entirely different roles at times.

The core universes this game takes place in were:

There was also an official tie-in comic series, Infinite Crisis: Fight for the Multiverse, released digital-first.

Shortly after launching on Steam in March 2015, Turbine decided to shut the game server down in August 2015. Some DC heroes managed to appear in another MOBA (Arena of Valor) but the Infinite Crisis was solved overall... for the DC Universe. Something similar would happen in the rival publisher's multiverse instead...

The Infinite Crisis video game is an example of: