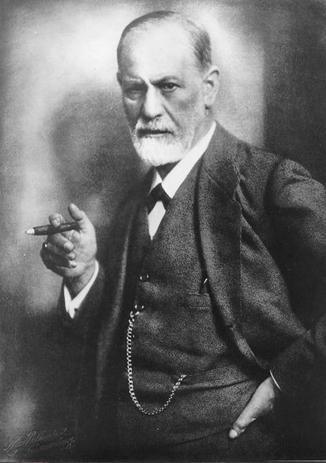 Not just The Shrink but the Shrink.

Sigmund Freud (born Sigismund Schlomo Freud, May 6, 1856 - September 23, 1939) was an Austrian neurologist credited as the Father of Psychoanalysis and the single most influential voice in the development of psychology from a fringe discipline to one of the essential pillars of understanding modern society and people within it.

He was controversial in his day, and remains controversial several decades later, with many commentators, within the field of mental health as well as commentators outside it, debating what they considered his overemphasis on the sex drive and the supposed universality of his chosen model of the Oedipus Complex in identity formation. Some of Freud's methods and conclusions, such as his early stuff drawn from his treatment of patients suffering from hysteria led him, in the views of some, to promote Single-Issue Psychology to the extent that one could cure one's ailments by delving into past memories. Likewise, Freud's relationship with his disciples and fellow practitioners (such as Carl Jung, Otto Rank and others) have drawn criticism for his somewhat acerbic and domineering control of his own approach to psychology over other alternatives. Freud's insistence on the scientific foundation for his theories have also drawn criticism from the likes of Karl Popper and others.

On the other hand, Freud is considered by many to be one of the great thinkers of modernity, for being the first major thinker to coherently argue that sexuality was a fundamental aspect of human society and critiquing the effects of repression and censorship. Some important chemists and scientists such as Henri Laborit and Eric Kandel note that what Freud lacked in proper methodology (mostly on account of the weak technology and machinery at the time he began his studies) he compensated for with amazing intuition and insight and that his papers are still valuable (albeit properly annotated and qualified) for practitioners in neuroscience and mental health. Within the humanities and the liberal arts, Freud is also praised for his considerable talents as a writer and essayist, with his famous books and essays inspiring several philosophers, anthropologists, sociologists and literary theorists to this very day.

So influential are his ideas and concepts, that via Pop-Cultural Osmosis, several aspects of his ideas and theories have more or less become "Common Knowledge". This includes his psychoanalytical method of "the talking cure" which pretty much defined Hollywood Psych and to an extent modern day psychotherapy; the concept of the Unconscious Mind, dream interpretations as a source for character insight, the mechanism of repression, the focus on childhood experiences in the shaping of the individual, Psychological Projection etc. A lot of modern films, literature and even plays, are made differently on account of his influence. He was even nominated for the Nobel Peace Prize thirteen separate times as a result of his achievements in psychiatry and psychoanalysis (but never won).

In addition to his own towering career, Freud is also The Patriarch of a notable family. His daughter Anna Freud became a famous psychologist in her own right who greatly expanded upon his original theories. His grandson Lucian Freud came to be regarded as one of the greatest British painters of the 20th Century. His niece Tom Seidmann-Freud was also a famous illustrator and graphic artist. His American double-nephew, Edward Bernays is well known in the field of modern public relationsnote Son of Freud's sister Anna and brother-in-law Ely and he would later claim that he devised the American bacon-and-eggs breakfast, based on his uncle's ideas. As a secular Jew born in the Austro-Hungarian Empire, and after World War I, in Austria itself, Freud faced a number of problems with the rise of Nazi Germany and the Anschluss. His daughter was briefly arrested by the Gestapo, and it took much high-profile diplomatic manoeuvering to get Freud and some of his family to emigrate to England. The Nazis only granted permission on account of Freud's great international fame and prestige. His other relatives however were not given permission to emigrate, and many of them perished in The Holocaust.

Freud spent his final days exiled in England, and died in September 1939 at Hampstead, England, which today is a museum containing much of his memorabilia (including his famous couch). His home and office in Vienna was subsequently converted into a museum in 1971 as well.

Sigmund Freud is portrayed in the following media: