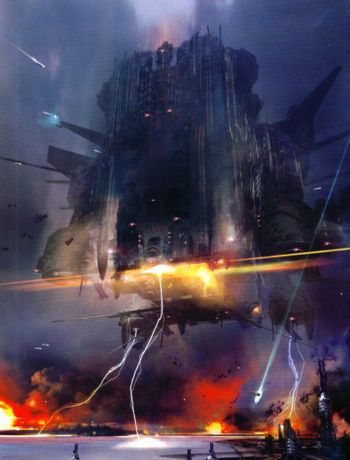 Destroy all you want. More will be built.
"Hear me Mandus. My gears are adjust, my steam is built. Soon I will spill that blue water and split the egg, the atom, my soul and there will be a very great burning that we might make the world clean. Be proud, for this is your doing. Until you steeped me in the blood of your own I was nothing but rotten architecture. You have made me, and I will make the world anew."
— The Machine, Amnesia: A Machine for Pigs

Not every monster comes from outer space, or another dimension, or an ancient myth. Some are built. A Mechanical Abomination is an artificial intelligence that has become so powerful it defies comprehension, either through Mechanical Evolution, The Singularity, alien origins, or some other process. It's more advanced than anything else in existence, and it's more likely than not coming to destroy us. Cyborgs are not necessarily excluded from this trope, especially if the organic components are also artificial, but the technological aspect of the entity should be emphasized.

These things come in two main varieties: The first is often between levels 4 and 5 on the Sliding Scale of Robot Intelligence. Unlike other monsters on the level of Cosmic Horror, this Mechanical Abomination is defined as much by its immense intelligence as its raw power, meaning it can communicate with humans and human-like beings and take notice of their actions. Bonus points if its thought process is something totally alien and unrelatable, or if it simply just doesn't care about other intelligent life or only sees it as a convenient means to an end. Misanthropic hatred doesn't necessarily disqualify it, mind you - it's just far easier to understand than something that is totally apathetic or selfishly pragmatic.

Other times, they're just twisted constructs that make you wonder how it's possible for them to function. Despite their mechanical appearances, they do things far beyond what typical technology can, disregarding normal physics. They're bizarre and often terrifying, but ultimately act according to whatever purpose they serve and aren't particularly sophisticated. They might actually even be Magitek constructs, working not on the laws of physics or normal programming as you know them. Expect them to look more like Starfish Robots most of the time.

This trope also lists artificial intelligences or programs with horrifying power, as seen in the Skynet (Terminator) example below.

Compare Mechanical Monster (which aren't as abominable, merely monstrous and powerful), Unnecessarily Creepy Robot (for robots that are repugnant or frightening but not powerful enough to qualify) and Deus Est Machina (this trope to that is like what Eldritch Abomination is to a Physical God).