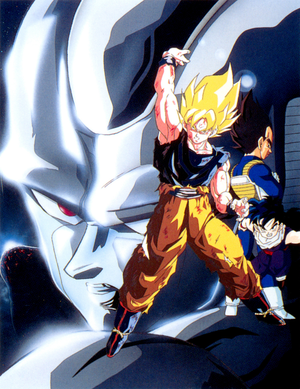 Dragon Ball Z: The Return of Cooler (ドラゴンボールゼット 激突!!100億パワーの戦士たち Doragon Bōru Zetto: Gekitotsu!! Hyaku-Oku Pawā no Senshi-tachi, lit. "Dragon Ball Z: Clash!! 10,000,000,000 Powerful Warriors") is the sixth Dragon Ball Z movie, originally releasing on Japan on March 7, 1992. It was released on VHS and DVD in the United States in August 2002 by Funimation. This film is a direct sequel to the fifth movie, Dragon Ball Z: Cooler's Revenge, and the first appearance of Vegeta in a movie.

The story revolves around a gigantic parasitic cyber-planet known as the Big Gete Star, which attachs itself to the recently recreated Namek. The native Namekians are enslaved by the forces of the Big Gete Star, which attracts Dende's attention back on Earth, thus he implores Goku and his friends to save his home once more. Once the gang arrive on New Namek, they encounter a familiar face spearheading the enslavement, none other than Cooler from the previous film, now in a metallic body.