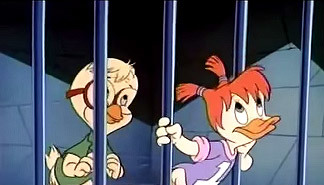 Bar guards are out of luck.
"Oh no, now they're trapped in one of those cartoon prisons where the bars are wide enough to walk through, but they just... don't for some reason? If you're wondering, animation does that often, since it's a stylistic choice so you can see their faces."
— RebelTaxi reviewing

The Night B4 Christmas
Advertisement:

Occasionally when a character is shown to be imprisoned, the spacing between the jail bars is actually wider than the character's body. He could easily walk through the bars and escape, but doesn't, for whatever reason.

This is primarily a cartoon trope. Live-action prison bars are rarely made this way, unless the gag is specifically sending up the cartoon trope. Drawn or rendered bars are spaced that way so that they don't interfere with the view of the character's face and body language. They're visual shorthand for imprisonment, and are not drawn functionally even if we're supposed to believe they work.note Some works, mostly manga, circumvent this by drawing the bars of realistic spacing but fading them out in the area near a character's face.

Look out for examples using other types of imprisonment devices, such as manacles or stocks, or in more modern-day works, shock collars/bracelets/electronic monitors for anyone who tries to take advantage of the wide spacing and puts as much as their hand or head through.

Serious Type: the characters and the audience are meant to take the bars seriously even though they're clearly spaced far enough apart to allow escape. In this type the bars are purely visual shorthand. Very, very rarely, a character might be put in such a prison by a jailor who is too dumb to realize that the prisoner is small enough to escape the prison. Or perhaps, simply, The Guards Must Be Crazy.

Comical Type: the character in the cell lampshades the spacing of the bars by sticking his/her head or torso through. Someone might even accidentally escape through the bars, having been too stupid to figure it out on purpose. A particularly savvy character might even wait for the jailor to leave before slipping between the bars and making his/her escape.

When presented as a serious obstacle, this is very similar to the Insurmountable Waist-Height Fence.