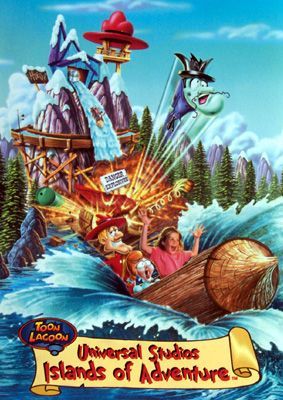 Dudley Do-Right's Ripsaw Falls is a log flume ride that's located at Universal's Islands of Adventure. Based directly off of the classic Dudley Do-Right cartoons, the attraction is essentially one giant episode of the show, but with a lot more water.

In the queue, guests walk through several locations, including one of Snidely Whiplash's hideouts and a theater where Dudley, Horse, and Nell are performing at. The typical Dudley Do-Right story then takes off as guests witness Snidely kidnap Nell from her dressing room, prompting Dudley and Horse to pursue after Snidely yet again. Guests then board floating log-shaped vehicles and follow the bumbling Mountie and his companion on their adventure to save Nell. In the ride, guests wind up in places like a mine shaft, a railroad (which of course Snidely tries to tie Nell to), a sawmill filled with an unusual amount of spinning sawblades, and another one of Snidely's own lairs before plummeting down a 75-foot drop into an explosive shack.

The ride was originally set to start operating in 2000, a year after the park opened; but budget cuts resulted in many elements of the attraction having to be scaled back, which allowed the ride to move ahead of schedule and open with the rest of the park on May 28, 1999.