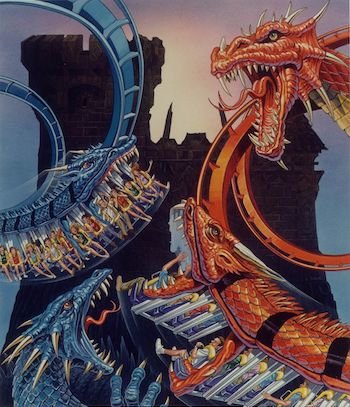 "Past this point of no return, your only choice is freeze or burn."
— Merlin
Advertisement:

Dueling Dragons was the name of a former pair of dueling roller coasters at Universal's Islands of Adventure. It opened with the park on May 28, 1999.

The story of the attraction centered around two dragons, Pyrock and Blizzrock, one of fire and one of ice, who are locked in everlasting combat over control of the land's castle and its loot. The wizard Merlin, having lost much of his magic over the years, is powerless to stop them and is only able to warn people looking to slay the dragons of the fate that awaits them. The riders served the role of these people, seeking to either stop or tame these dragons and bring peace to the land once again.

In 2010, the attraction's surrounding Merlinwood area was replaced with The Wizarding World of Harry Potter. As a result, it was renamed Dragon Challenge and re-themed to focus on the Hungarian Horntail and the Chinese Fireball from the Tri-Wizard Tournament in Harry Potter and the Goblet of Fire. In 2011, due to two separate incidents believed to be caused by loose objects falling from the ride, the dueling aspect of the coasters was removed. Six years later, the coasters closed permanently on September 4, 2017 to make way for a new coaster called Hagrid's Magical Creatures Motorbike Adventure.