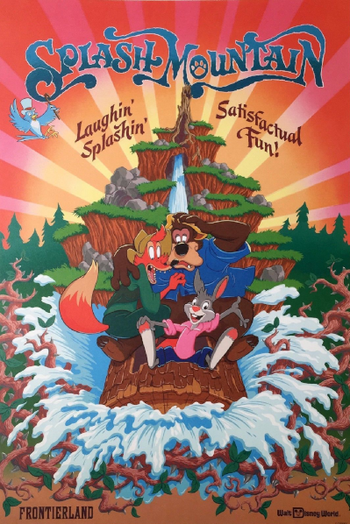 The attraction features characters from the film's animated segments, focusing on Brer Rabbit leaving his briar patch home in search of his "Laughin' Place". Brer Fox and Brer Bear seize the opportunity to finally catch him, but he manages to stay one step ahead of them - well, until they finally reach the "Laughin' Place" and Brer Fox traps Brer Rabbit in a beehive. Fortunately, Brer Rabbit outwits Brer Fox by begging him not to throw him in the briar patch, which Brer Fox does - which is our cue to hurtle out of the mountain and down a waterfall, landing in the briar patch with a large SPLASH. Many of the animatronics in the Disneyland version were recycled from America Sings.

In June 2020, it was announced that the attraction's Disneyland and Walt Disney World counterparts would be re-themed to The Princess and the Frog. Although the announcement coincided with renewed calls for Disney to rethink its connection to Song of the South, following waves of international Black Lives Matter protests and a greater awareness of racially problematic material, Disney stated that work on the revised attraction had begun a year earlier and an official announcement was delayed because of the COVID-19 Pandemic. The Tokyo Disneyland attraction will be unaffected at this time.

(Disney doesn't own Tokyo Disneyland; the company licenses its characters and products to the Oriental Land Company for use there.)