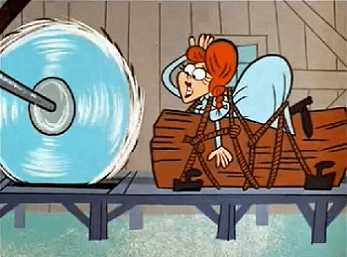 Nell, about to have a splitting headache.
"Your fahzha is going to have an unfortunate shmelting accident!"
— Goldmember, Austin Powers In Goldmember
Advertisement:

Not to be confused with Inconveniently-Placed Conveyor Belt, a common hazard in video games.

The main character(s) have become trapped on a conveyor belt (mining ore cart, log in a flume, or any other mechanized delivery system) responsible for shuttling them into a large blast furnace or incinerator, crusher or grinder, large rotary saw blade(s) or anything else that will give them a quick and painful end.

Sometimes this is done purposely by the villain (like tying the Damsel in Distress to railroad tracks) as part of (or in place of) a Death Trap, or as a method of interrogation (as an alternative to physical torture). Thus, often a part of Lumber Mill Mayhem. Or the heroes may wind up in such predicament by more or less coincidence but still have to find a way to escape whatever machines whose job of processing and/or assembling raw materials is invariably lethal to their soft warm bodies.

Commonly seen in large mechanized factories, mills, mines, research labs — or any place with No OSHA Compliance. This may also provide the reason why the heroes always end up trying to run against the direction of the conveyor instead of, say, trying to leap off the side — it may be 1-Dimensional Thinking on the part of the writer, or perhaps the conveyor belt is situated high up where there really is nowhere else to jump to.

If the hero wasn't deliberately tied or trapped on this conveyor by a villain, expect them to trip over something, or get an arm or leg snagged underneath whatever debris or items normally travel the belt, just to up the tension. Likewise, if there are any Mooks trapped on the conveyor with the hero, expect them to be the first ones meeting whatever doom awaits at the downstream end. Depending on the length and path of the belt, sometimes the ultimate fate of the conveyor belt is unknown at first, giving everyone a moment to look up in shock once they realize exactly what they're being drawn towards.

Playing Raymond Scott's "Powerhouse" in the background during such a sequence is purely optional.

Originated as a standard Cliffhanger scenario in 19th-century melodramas and the silent matinee film serials that followed them, such as The Perils of Pauline (and echoed repeatedly on The Perils of Penelope Pitstop). Probably a Dead Horse Trope, at least in the dramatic sense. But then, it wasn't too bad in Enemy Mine.

Compare the comedy Sister Tropes Assembly Line Fast-Forward, which involves the characters working at a conveyer belt, and Packed Hero, where the machinery stuffs the hero into a container.