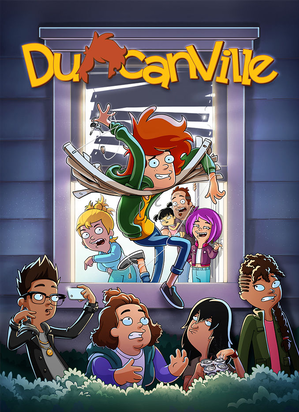 Duncan Harris, a "spectacularly average" 15-year-old boy, is always one step away from making a bad decision. Along with Duncan lives his mom, Annie, a parking enforcement officer who dreams of being a detective, his dad, Jack, who tries to be a better father figure to Duncan than his father was to him; his sister Kimberly, who is a normal teenager going through normal teen-phases; and his adopted sister Jing, an intelligent 5-year-old always giving Duncan advice.
Advertisement:

Duncanville premiered as part of Fox's revived "Animation Domination" block on February 16, 2020. The series was co-created by Mike Scully, who previously worked on The Simpsons, wife Julie Thacker-Scully (who also wrote several episodes during her husband's time as showrunner), and Amy Poehler, who previously worked on Upright Citizens Brigade (the sketch comedy troupe and Comedy Central series), NBC's Saturday Night Live and NBC's Parks and Recreation. On June 30, 2022, it was announced that the series had been cancelled after three seasons.

The intro to Duncanville.

The intro to Duncanville.