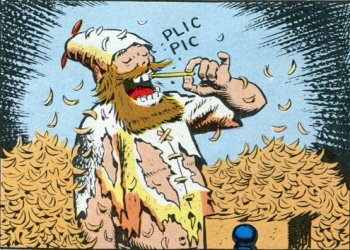 Toothpicks, matches, ice cream sticks, paper products, etc. are in Real Life made from easily replaceable pulp-grade softwood. It would be unfathomably wasteful to harvest virgin timber solely to obtain wood for, as an example, toothpick making. Even more so to use an entire tree for a single toothpick. So naturally works of comedy depict just such a process for its absurdity. Sometimes done for laughs, other times as a Green Aesop.