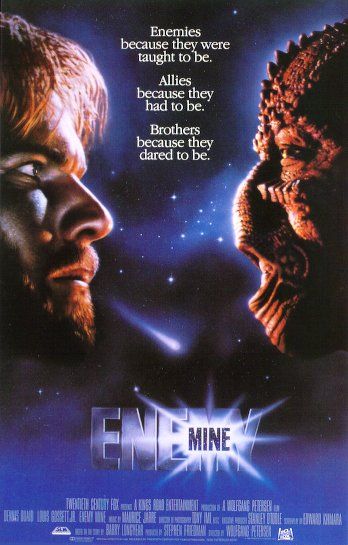 A 1985 Sci-Fi film, directed by Wolfgang Petersen and adapted from a Barry Longyear novella.

The humans and the aliens (Dracs) have been at war (in space) for some time now. There's a great deal of prejudice between them, and the humans think of the Dracs as "lizards" and some worse terms.

Then this one human, Willis Davidge (Dennis Quaid), shoots down a Drac ship, and both ships crash-land on a dangerous planet. Davidge's co-pilot dies and he's left to fend for himself. Then, while trying to get revenge on the Drac, he ends up getting captured instead.

The Drac, whose name, Jeriba Shigan (Louis Gossett Jr..), gets shortened to "Jerry" for the film, forces Davidge to slave away at building shelter and such, as he managed to hang onto his sidearm. But when the danger from deadly terrain, storms and predators gets to be too much, Jerry and Davidge end up working together, and then becoming friends.

Then Davidge decides to head out and see if there's any chance of them being rescued, but Jerry won't come with him. A good thing, possibly, as Davidge finds good news in the form of a futuristic Pepsi can (evidence that humans have visited Fyrine IV) and bad news in the form of a Drac skull (evidence that the humans are illegal strip miners). Once Davidge gets back, he learns that Jerry is pregnant (turns out that Dracs can self-fertilize and have no control over the process). Sadly, something goes awry and Jerry dies in childbirth, so Davidge raises the kid, Zammis (ZAH-mees) (Bumper Robinson), by himself.

Either because the film studio thought that Viewers Are Morons or because films work better with a climax, the villainous humans return to set up their mine run using Dracs as slaves. Since Davidge didn't teach Zammis that some humans are evil bastards, Zammis quizzically wanders into the area and gets captured. Davidge tries to save him but is shot dead by a scenery-chewing slavedriver played by Brion James.

Or so it seems. Turns out his body is retrieved by a military scouter and brought back to the starbase where he once served. They're just about to give him a funeral (straight out the airlock) when he revives and starts mumbling in the Drac language while unconscious. His former comrades nurse him back to health, and he steals a ship and heads off to find Zammis.

In a final conflict with the evil miners, Davidge enlists the help of the Drac slaves, freeing them, taking out the overacting slavedriver and his cronies, and finding Zammis, for a moment like he was dead but then he rouses and says his Catchphrase from earlier, "Zammis get four, five?" (referring to how Dracs have only 3 digits on their hands while humans have 5).

Because Jerry taught Davidge his Drac lineage (something highly treasured in Drac culture), he is able to recite it to the elder council on Zammis' home world and formally introduce the young Drac to his own society. In honor of his actions, Willis Davidge's name is added to the Jeriba family line.

And for the record, not actually the Trope Namer for Enemy Mine. That honor goes to the novella this is based on.

The novella and film provide examples of the following tropes: