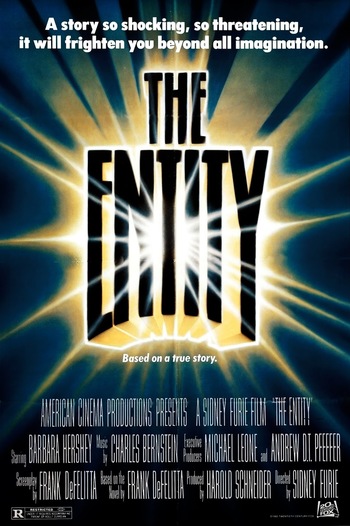 "Something evil is after Carla Moran, and it will stop at nothing to get her."
Advertisement:

The Entity is a 1982 horror film directed by Sidney J. Furie, based on the 1978 novel of the same name by Frank DeFellita and inspired by the supposed real-life hauntings of Doris Bither.

Carla Moran (Barbara Hershey) is a single mother of two girls and a teenage son who one night finds herself attacked and raped by an invisible assailant, an event that continues to repeat itself. Her friends, family, and psychologist all believe she's going crazy, but a team of paranormal scientists believe her and are determined to bring an end to her attacker.