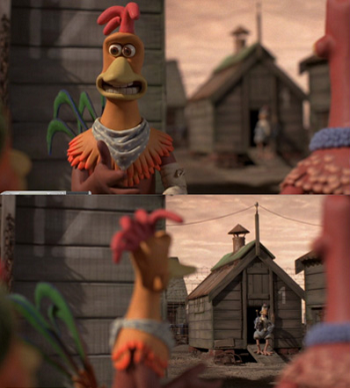 The span of distance along the shot axis in which objects will be in focus. Determined by focal length and iris aperture.note Basically, the smaller the aperture, the deeper the depth of field; pinhole cameras can often produce a razor-sharp picture at the expense of longer, darker exposures. A more open aperture lets in more light, but since it's less directed, as the hole gets wider, the picture overall gets fuzzier. Also note that the closer the subject is the smaller the depth of field will be (especially important in Macro photography

), and that the depth of field decreases as one increases the focal length.

Skillful management of this property is a requirement for Rack Focus.

A shallow Depth of Field might be used for scenes set in restaurants and other public settings to keep the background blurry, and thus de-emphasize it for intimacy's sake (or to blur out people in the background that might oppose to having their picture taken, especially common on shows like Law and Order which frequently film in crowded areas full of non-acting people.)

2001: A Space Odyssey, Star Wars, and the 1978 version of Battlestar Galactica were innovative in that the models of the spaceships looked like large ships which were far away. Among other things, small lens apertures to lengthen the Depth of Field strengthened the illusion.

Long depth of field is sometimes faked by Forced Perspective — having an object in the foreground be an oversized prop. An example would be the One Ring lying in the snow in Fellowship. The prop ring for that shot was the size of a plate.

Modern video games attempt to emulate the depth of field effect of a real camera via a number of post-production effects, some of which are quite adept while others are decidedly less so. More traditional forms of art can play about with it using Graphical Perspective.